Model-Based Dosimetry and Imaging for PDT 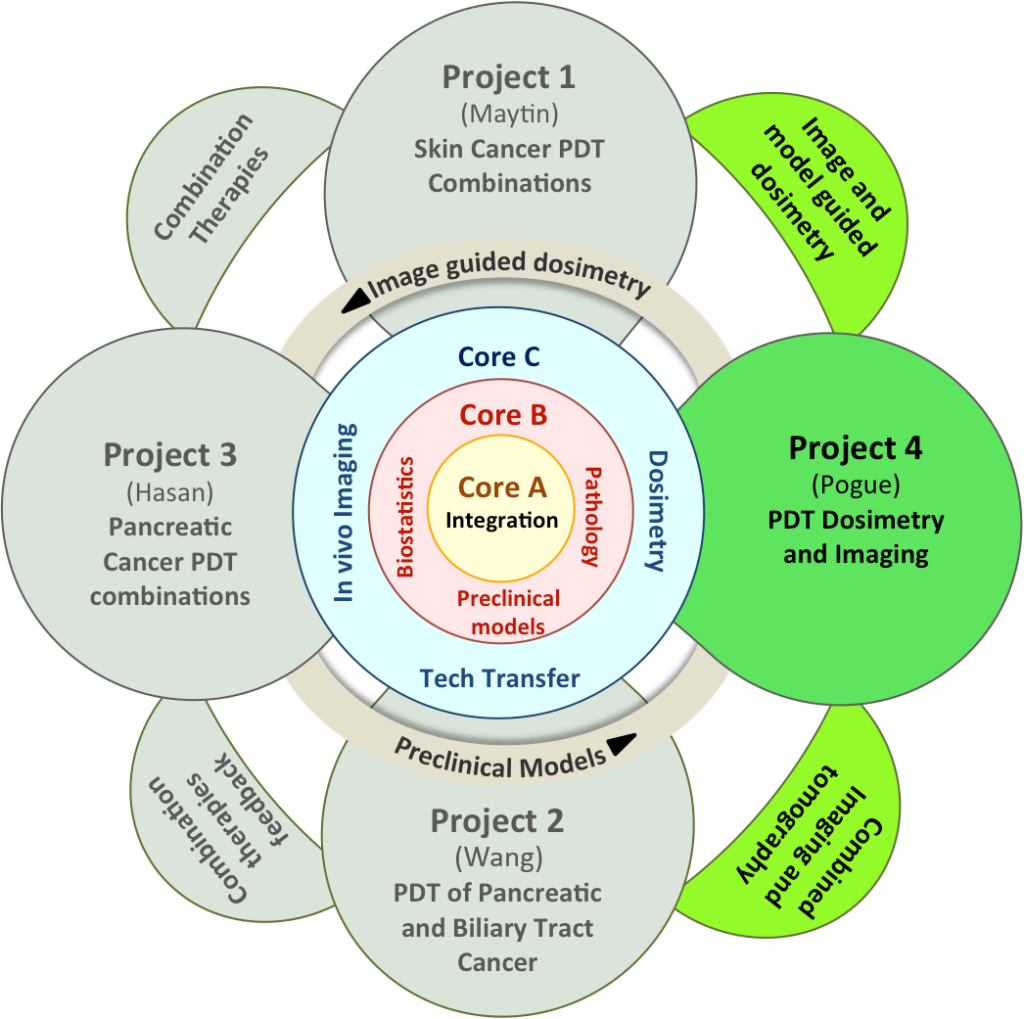 Project 4 advances the use of two novel technologies to image tissue in experimental cancer models and in patients, and will test hypothesis that these can be used to image tissue biophysical parameters, photosensitizer concentration and blood flow in tumors.

The central theme in this project is that optical spectroscopy can be used in vivo to accurately measure bulk tissue values, but must be used in a way, which is image-guided. Image-guided spectroscopy utilizes transmission or remission measurements for their superior signal to noise in measuring molecular concentration in vivo, yet also allows integration of the measurement into existing medical imaging technologies, such as magnetic resonance imaging (MRI), high frequency ultrasound (HFUS), and optical coherence tomography (OCT).

Photodynamic Therapy is widely used in the clinic to successfully treat skin lesions such as actinic keratosis and non-melanoma skin cancers. However, patients often report moderate to severe pain, the cause of which is unknown. Recently, a number of studies by Dartmouth researchers have examined the use of “daylight” PDT, a low-fluence PDT light dose delivered by the sun, which is reported by patients to be low-pain. We are now seeking to quantify the effectiveness of a variety of low-fluence light sources in normal mouse skin. In addition to traditional dosimetric measures we are also quantifying a biological marker of PDT success—the induction of crosslinking (inactivation) of the pro-cancer protein STAT3.

Shown below is a false-color fluorescent image of an area of skin where aminolevulinic acid HCl was applied topically 12 hours before imaging. The excess aminolevulinic acid has been absorbed in the skin to produce Protoporphyrin IX (PpIX). In this image blue light (405nm) is used to excite the PpIX, which then emits with a peak wavelength of 635nm. A 635nm bandpass filter is used to reject light outside of this range, resulting in the PpIX fluorescence providing the primary contrast seen in the image. Similar techniques are used to quantify the production of PpIX, which is the primary photosensitizer used in Photodynamic Therapy of Actinic Keratosis.

Pancreatic tumors are characterized by large interstitial pressure from enhanced deposition of extracellular matrix components, resulting in widespread vascular collapse and reduced molecular uptake of systemically delivered therapies. Although the origin of hypoperfusion is debated amongst researchers, spatial distribution of collagen content and hyaluronic acid content have shown to be key metrics in understanding the lack of efficacy for both acute and chronic therapies in these tumors.

In this study, three pancreatic tumor xenografts, AsPC-1, BxPC-3, and Panc-1, were used both subcutaneously and orthotopically to study the measurable factors which are related to this. A conventional piezoelectric pressure catheter was used to measure total tissue pressure (TTP), defined as a combination of solid stress (SS) and interstitial fluid pressure (IFP), TTP = SS + IFP, in three locations within the tumor interstitium. Matrix components such as collagen and hyaluronic acid were scored using masson’s trichrome stain and hyaluronic acid binding protein (HABP), respectively, and co-registered with values of TTP. Additionally, these key measurements are related to the spatial distribution of patent vasculature (Lectin stain injected i.v. 1 minute prior to sacrifice) and verteporfin (injected i.v. 1 hour prior to sacrifice) in the same tumor.

Photodynamic treatment with verteporfin is known to ablate large regions of tumor tissue and also allow better permeability for chemotherapies. The study of spatial distribution of verteporfin in relation to stromal content and TTP will help us better control these types of combination therapies.

Aim 1 utilizes a commercial prototype system for combined MRI-NIR tomography of experimental rodent models, to study the biophysical changes in hemoglobin, oxygen saturation, water and sub-cellular granularity, which can be assessed by NIR tomography. The changes in response to chemotherapy and receptor signaling can be measured by longitudinal imaging studies using this new imaging system. The pancreas cancer model will also be used to validate the imaging, by systematic and quantitative comparison to ex vivo measurements.

In Aim 2, the ability to combine fluorescence optical tomography with structural imaging systems such as OCT and HFUS will be tested, as a way to quantify the photosensitizer concentrations in skin. These unique hybrid systems will be validated in phantoms and tissue cultures, and then used to study skin cancer tumors in vivo.

Finally, Aim 3 will advance the concept of using photosensitizer imaging as a way to individualize dosimetry treatment planning, using the systems described above. The uptake rate in the tissue can be quantified using image-guided absorbance imaging. This work will also involve modeling of the parenchyma versus vascular partitioning of the drug in a pancreas tumor model, to aid in the related studies of clinical pancreas cancer PDT.

Project 4 will translate key developments to Core C, for eventual distribution to other projects, and will use software tools developed in the core. The project uses microscopy analysis and knowledge from Core B to analyze the histology sections, to validate the in vivo imaging with ex vivo quantitative pathology. The project uses common tumor models from the other projects and Core B, and also leverages considerable imaging resources from ongoing work in tools for optical imaging.